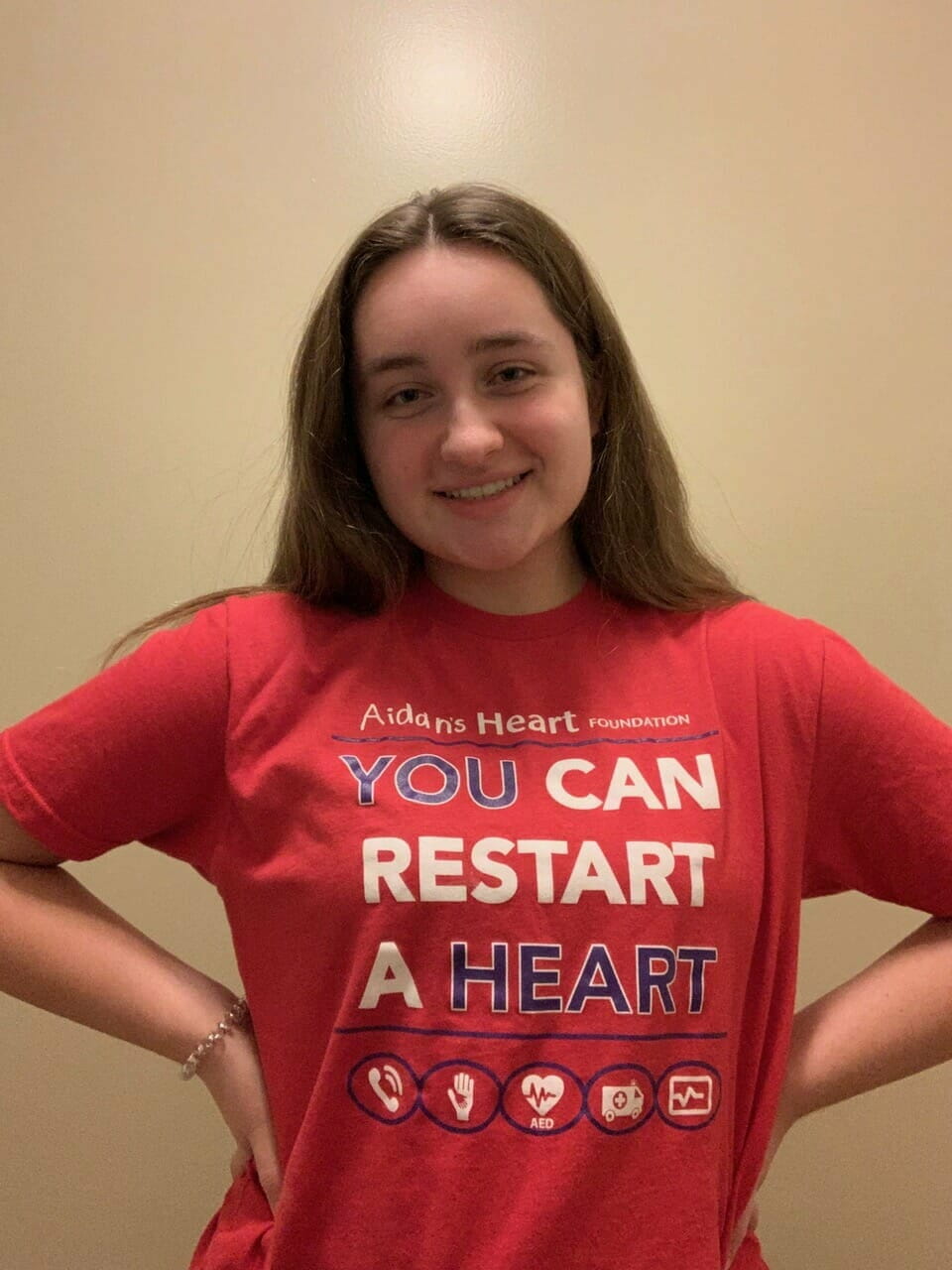 On Thursday June 2nd, Aidan’s Heart Foundation hosted for the first time a “Youth-Led Hands-Only CPR + AED Community Training” event at the Marsh Creek Sixth Grade Center. While the event was hosted by our three Heart Hero CPR trainers, Cameron Donovan, Teigan Brown, and Jack O’Connell, the event itself would not have been possible without the time, effort, and dedication of the Heart Hero Executive Team. This Heart Hero Executive Team is made up of three local high-school students—Maycie Kulp, Bailey Mullen, and Anna Powers.

Aidan’s Heart Foundation takes extensive pride in our volunteers and once again chooses to use this opportunity to highlight each of the three young Heart Hero Executive Team members. These Heart Hero members contributed significantly to the preparation and success of the June 2nd event.

Our next spotlight hero is BAILEY MULLEN.

Bailey, a recent Downingtown West High School (PA) graduate, will be embarking on a new academic journey this fall at Susquehanna University in Selinsgrove, PA. This lifelong Downingtown native is still undecided as to which direction her newfound academic career will take, but it is her intent to minor in Spanish with her ultimate goal of studying abroad one semester in Spain.

Outside of academia, Bailey has been a prolific volleyball player since the 5th grade and considers this her favorite recreational activity. The past year she helped the Downingtown West Whippets qualify for the PIAA 4A state tournament for the first time since 2018, making it a magical senior season. Although saying goodbye to her team has not been easy, the now-former Whippet intends on continuing her volleyball passion in a recreational capacity at Susquehanna University.

Bailey shared that at a very young age her mother reiterated the importance of learning everyday life-savings skills. Heeding her mother’s wise advice, Bailey obtained her CPR certification prior to entering middle-school and has continued to renew it every two years. In sixth grade, the volleyball enthusiast transferred from Collegium Charter School in Exton, PA, to Downingtown's Marsh Creek Sixth Grade Center. Shortly after her arrival at Marsh Creek, Bailey was introduced to Christy Silva, Aidan’s Mother and Board President of Aidan’s Heart Foundation. Christy’s inspiring story and heartfelt presentation inspired a host of students and Bailey was no exception. She witnessed firsthand Christy’s passion for the foundation and soon learned that many of her current classmates had been friends with Aidan when he attended Brandywine Wallace Elementary School.

Bailey was recently reintroduced to Christy at the annual Marsh Creek Sixth Grade Center event, and this time interacted on a more personal level, thus allowing Bailey to witness the amazing work Aidan’s mother has been doing as well as all the accomplishments that accompanied the work of the foundation. At this point, Bailey committed herself to playing a supporting role in furthering the mission of the foundation.

As a result of her collaboration with Christy, Bailey, along with the other two Heart Hero Executive Team members, Maycie Kulp, and Anna Powers, the first ever “Youth-Led Hands-Only CPR + AED Community Training” event would come to fruition on June 2nd. Bailey went on to describe the most rewarding aspect of this event for her was witnessing the community coming together as one to ensure that more of society is prepared in responding to a Sudden Cardiac Arrest (SCA) episode. Observing her classmates teaching these important and lifesaving skills, and watching her own neighbors actively learning and participating, further cemented the ongoing mission of the foundation.

She added, “It was heartwarming to observe Christy’s excitement and appreciation for the participating students who would have been in high school with Aidan this senior year.”

At the end of our conversation, Bailey again reiterated the importance of Aidan’s Heart Foundation on one’s community but stressed its importance and the impact on her as an individual. Simply stated, “No matter where life takes me, these life lessons will follow and I will continue contributing to my community in any way feasible as well as continuing my involvement with Aidan's Heart Foundation.”