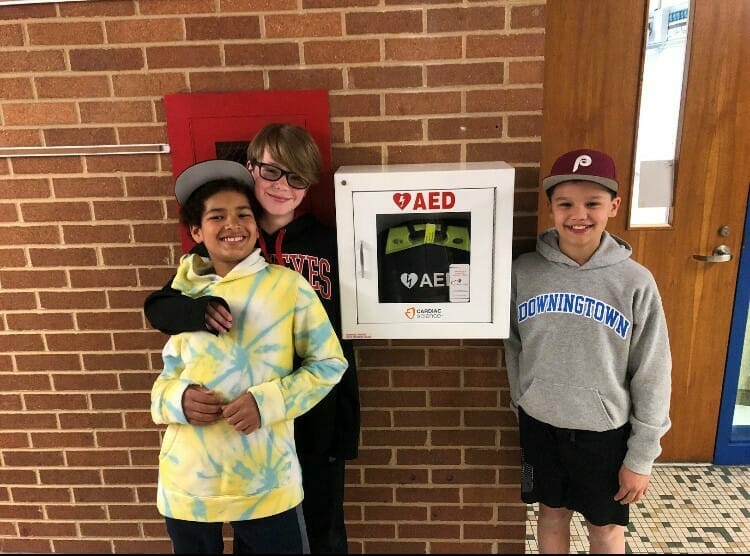 “We want to make sure we’re prepared.  We hope (sudden cardiac arrest) never happens here, but now we feel safer if it does.”

— Louis, Will and Sebastian, East Ward Elementary School Class of ’22

At East Ward Elementary School in Downingtown, three 5th grade students have taken matters into their own hands to protect their school community’s hearts.

Louis Oswald, Will Shook and Sebastian Villarose received an assignment from their 5th grade teacher, Ms. Brianna Tredway, last month. While working as a seasonal director for five years with Dragonfly Forest, a summer camp for children with autism, 22Q, sickle cell anemia and other disorders, Ms. Tredway came up with the idea for the Disability Awareness and Acceptance Project. Through this project, she encourages her young students to learn about various populations as well in order to promote acceptance and empathy and even spread knowledge to others in their school.  She has assigned this project to her students for the last several years.

“Choose three disorders or disabilities to learn about, and I’ll determine which one will be the focus of your project,” Ms. Tredway directed.  The trio selected Sudden Cardiac Arrest in addition to two other conditions that affect young people, and Ms. Tredway deemed SCA the focus of the group project.

To learn more about the causes of Sudden Cardiac Arrest and how frequently it impacts the lives of young people, Lou, Will and Sebastian rolled up their sleeves and dug in to research on  the topic.  They watched this video about SCA and its effect on kids, which includes a story after story about tragic deaths that occur in young people when AEDs are not available. They talked with their fourth grade teacher, Ms. Smith, who told them about her college-age nephew living with a heart condition who needs to carry an AED with him at all times to protect himself.  And they all recalled the scary incident that happened not long ago with their classmate who collapsed when she had a seizure. Thankfully, the seizure was not related to a cardiac issue.

The boys learned that up to 9,000 young people every year are stricken by Sudden Cardiac Arrest, usually without any warning signs or symptoms.  They came to understand that immediate response through using CPR and an Automated External Defibrillator, or AED, during the first 2 minutes of a cardiac arrest can increase a victim’s chance of survival to 90%.  They found the recommendation by the American Heart Association that for schools to be best prepared for cardiac emergencies, every floor of every school building should have an AED.

But… AEDs are still not mandatory in schools in Pennsylvania.  And although the school buildings in Downingtown Area School District all have at least one AED, most of the buildings have more than one floor, or the floor plan of the building doesn’t allow for placement of the AED within the recommended “brisk two-minute walk”.

Prior to one month ago, East Ward Elementary School had two AEDs.  They are each more than 10 years old.  The building is three stories high.  According to these young citizens, a change was in order.

“This would be a cool senior project, to get another AED for East Ward,” remarked Louis upon learning of the need that existed.

“Why wait?” goaded his energetic friend, Sebastian.  “Let’s do it now!”

So, Will, Louis and Sebastian thought about how they could get a third AED for their school.  They learned that they could petition the school district, write a big paper, and wait– likely until after they graduated 5th grade next month– for a response.  Or, they could take matters into their own hands and raise the money needed for this device.

“At first, we were clueless, but we knew we had to raise as much as possible,” recounts Will.  The boys had heard about club fundraisers at local businesses such as Chic-Fil-A, but an uptick in the pandemic prevented them from putting this idea into action.  So, they got creative.  The boys made a flyer and used their charisma and knowledge to put together a short compelling video and posted it on their school-wide announcements.  They were doubtful.  “I didn’t even think we’d get $100,” bemoaned Sebastian.

How unbelievably, fortuitously wrong they were.

Within the next month, over $1,800 was collected in envelopes sent into school from generous family and community members, in addition to Facebook fundraisers that their parents set up toward the effort.  Enough money, the boys realized, for not one, but two AEDs.

On average, an AED costs between $1000 and $1600, depending on the model. A wall-mounted cabinet retails for $125.  However, these young community members knew of Aidan’s Heart Foundation, an organization based in their hometown that supports efforts to place AEDs and reached out to ask for help.  With non-profit pricing through established relationships with AED providers, the boys learned that they could acquire a life-saving device for a reduced cost of $700 by partnering with the organization.  They asked the foundation for a few minutes to pitch their project via Zoom at the foundation’s March board meeting, and these young men astounded the team with their knowledge and presentation skills.

For Louis Oswald, creating change at the individual level for the benefit of the community is not a new concept.  Just three years ago, when his beloved grandfather Ken Mangold passed away, Lou’s family bequeathed honorary donations to Aidan’s Heart Foundation. Incredibly, more than $5,000 was raised, and together, the family and the foundation installed three AEDs in the local community where youth participate in school and physically active activities.

Just last Monday, Aidan’s Heart president, Christy Marshall-Silvaand vice president, Dr. Christa Glogowski, delivered two AEDs and wall-mounting cases to East Ward Elementary.  On Friday, the boys told their classmates via a morning announcement video about their efforts and the result and received high praise, congratulations, and gratitude. “WE DID IT,” they beamed!

The devices will be hung in visible, publicly accessible locations, on the first and third floors of the school building. A poster that the boys created, highlighting that anyone can use an AED (the machine voice prompts provide direction to users) will be displayed next to each machine. And all students can rest assured knowing that, should a cardiac emergency strike, these life-saving devices are just inches away.

Says Ms. Tredway of the boys and their project:

“What made this project so successful for all of my students is the fact that they are given a choice of topic that they are interested in, they conduct the research themselves and build their own knowledge, and then they get the opportunity to promote awareness, acceptance, and empathy in our school. This group of boys went beyond just promoting awareness and acceptance, but they took the next step. Action. And wonderfully enough, this action will save lives. I admire their initiative and outlook to take measures into their own hands. That is very admirable and impressive for students their age.” (click for audio version of this quote)

Never doubt that a small group of thoughtful, committed citizens can change the world; indeed, it’s the only thing that ever has.

We are grateful to our community’s newest Heart Heroes– Will Shook, Louis Oswald, and Sebastian Villarose– and to the adults who guided their ambitions and steered their energies along the way to make this project come to fruition.  Special thanks to Ms. Briana Tredway, Principal Dr. Nicholas Argonish, School Nurse Lucy Ferrara, Dr. Christa Glogowski and the parents of these young agents of change for their mentorship and encouragement.

— Written by Christy Marshall-Silva, Aidan’s Mom and President of AHF